Yesterday morning I got a call that one of my close friends had lost his mom and my heart sank.

Ever since the news I've been a bit of an emotional wreck.
Not because I was so close to his mom, truth be told I hadn't seen her in over two years, but because I know all too well the roller coaster my friend and his family are about to go on.
It breaks my heart.
I feel helpless.
I know there is nothing I can say or do to take the pain and hurting away.
Prior to my mom's death, I was always sad to hear someone I knew lost a friend or relative, but now....now it brings all the emotions I went through flooding back.  I don't want to see my friend have to go through that.  No one should have to go through it.

But unfortunately, God had a different plan.

One I will probably never understand.

So now I will do all that I can.
I will put on my brave face to be there for my friend just as he was there for me.

Saturday marked exactly 3 months since I joined Weight Watchers.
3 months since I decided to make a change.
In these first 90 days I've earned countless 5 pound stars, 5% lost, 10% lost and hit my first 25 pound milestone. My grand total as of Saturday was 34.2 pounds lost.
Can I get a hell yeah?!
Here's a little comparison for you.  Picture 1 is after my first week with 6.6 pounds lost.  Picture 2 is at 20 pounds and the most recent at almost 35 pounds. 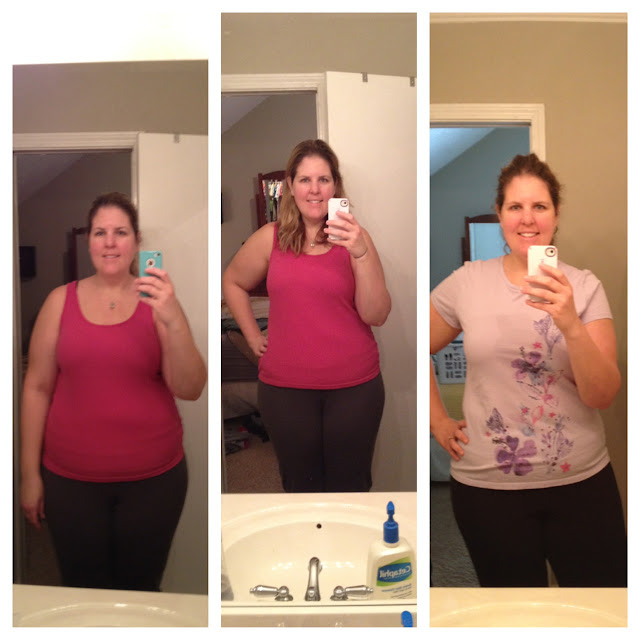 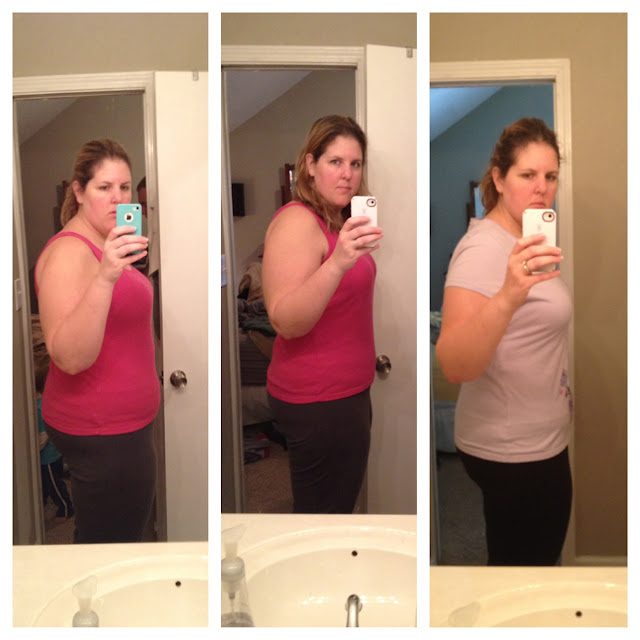 ﻿I'm wearing clothes that haven't seen the light of day in years and just last week I started wearing my pre-pregnancy bras!  Alleluia!  It's nice to see normal letters of the alphabet in my bra size again!  I'd also like to point out my bust actually sticks out now more than my stomach.  It's like I got boobs again!
The most exciting was buying a dress for an upcoming wedding in size Large.
Yeah I know what you're thinking, most women would throw themselves off a bridge if they had to buy a large, but when just a few months ago you were an XL...sometimes even an XXL...a L is enough to get a happy dance right inside the dressing room!
I've obviously got this eating right thing down.
The working out part...not so much.
Actually not at all.
I hate working out.  Hate.
I can diet and limit my foods until the cows come home, but ask me to step on a treadmill??  No way.
I'd rather die.
The worst part is when I'm continuing to lose weight at such a steady pace without out it, there's not much motivation for me to start.  But I know I have to.
I wanted to make a change for the better, not just eating healthier, but being more active.
So that's my goal for the next 3 months.
Keep up with the good eating....add in some moving.
I bought new batteries for the Wii Fit and I got two new workout DVDs so I have no excuses.
Plus it's staying light out longer and I still want to try the couch to 5K program.
I dropped the ball on running the Color Run here in KC and now it's sold out, but I just saw they added Columbus as a new city in July.  It's tempting.  A trip to my old hometown AND motivation to run a 5K?  Sounds like a win win!
I'm also hoping it will help prevent any dreaded plateaus and help me make my next goal: wedding weight by Jamie's 2nd Birthday.
This means I have about 35 more pounds to lose by August 9.
I'm pretty confident I can do it!  And when I do, maybe I'll bust my dress out of the box for old times sake!

This Easter was a blast!
I feel like it's the first holiday that Jamie has actually understood.
Or at least knew it was something special.
Every time he saw a bunny he'd laugh and say "Bunny!!  Hop hop, hop!"
I just about died every time.
Where does he come up with this stuff!
We kicked off the festivities with an Easter Egg hunt bright and early Saturday.
Unfortunately the actual hunt was rained out and moved inside, but he still got to collect some eggs for his basket.  And who doesn't love an excuse to wear preppy clothes two days in a row! 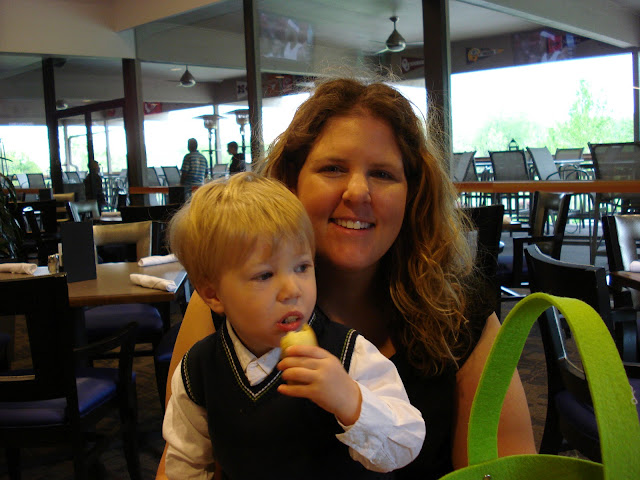 He wasn't a huge fan of the actual Easter Bunny aka the person in the creepy suit.
But can you really blame him?  About as close as he would get was a high five and a wave goodbye.
Maybe next year he'll be a little more courageous! 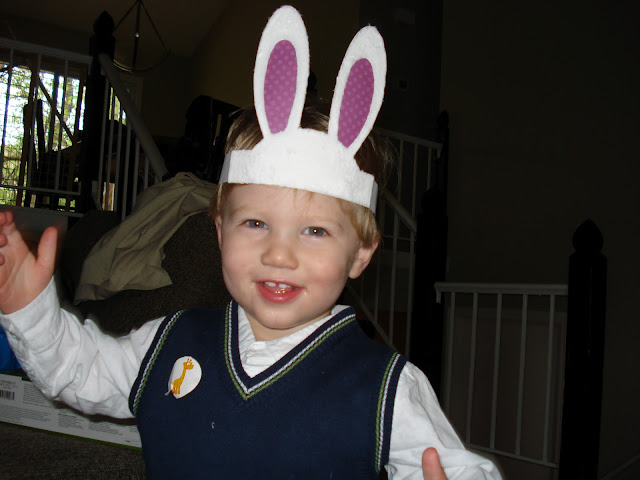 Sunday morning we were up bright and early to check out what the bunny brought.
Books.  Always a safe choice.  And Finger Paints.  The bunny got brave.  I blame Pinterest. 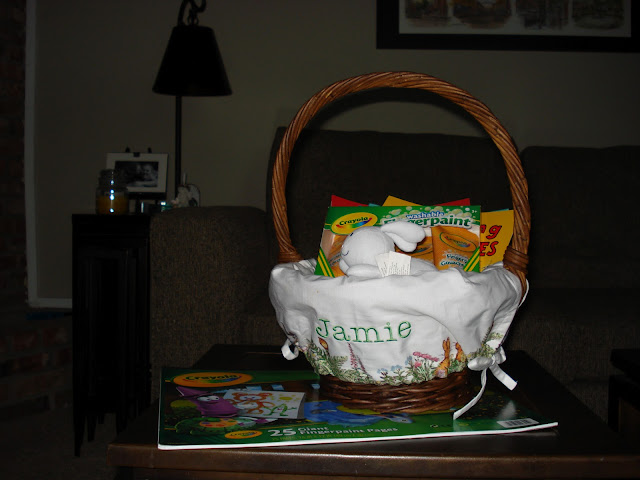 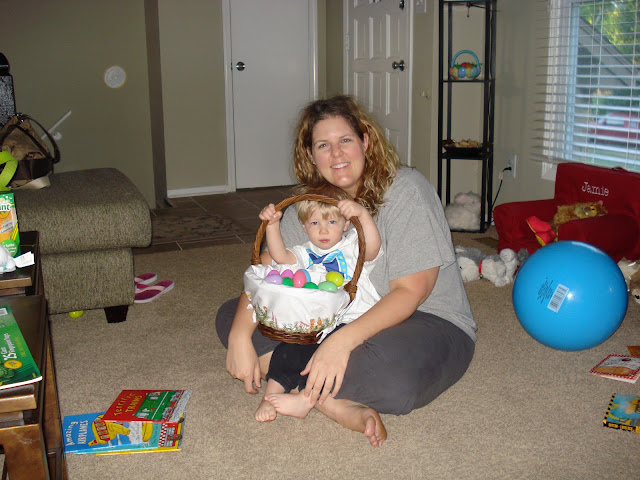 You'll notice all the loot was promptly removed and replaced with plastic eggs.
Note to the bunny.  Next year save your money.  Just bring eggs.
Oh.  And don't wait until the last minute to order an Easter shirt and then be left with only one option which gets ordered in a youth size 2-4 NOT a 2T.  Oops.
Bunny fail. 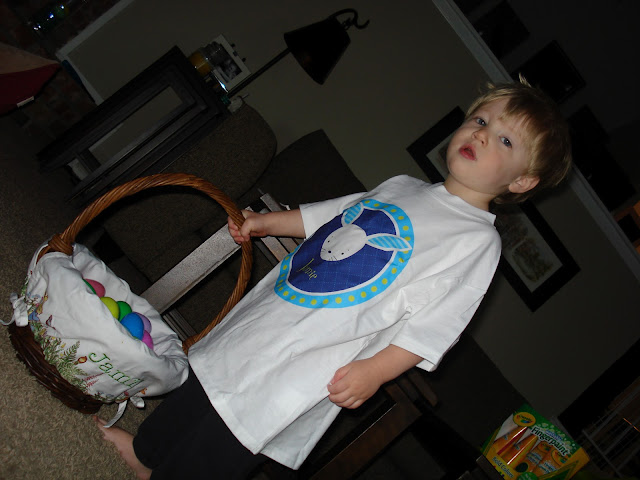 Mom.  I am not amused by my shirt dress.
Thankfully his real Easter Duds fit much better.
Cause we all know real men wear pink. 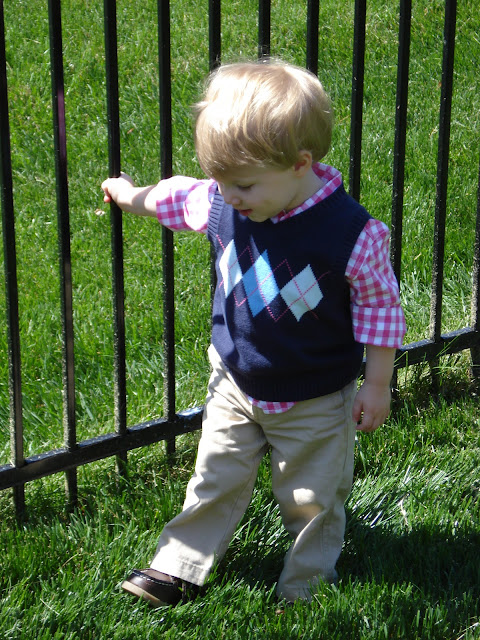 And Easter wouldn't be complete without a family picture.
If you're really on the ball you'll notice I'm wearing the same dress as last year...
31.8 pounds later it needed a little tweaking, but surprisingly still worked!
I'm hoping next year that won't be the case! 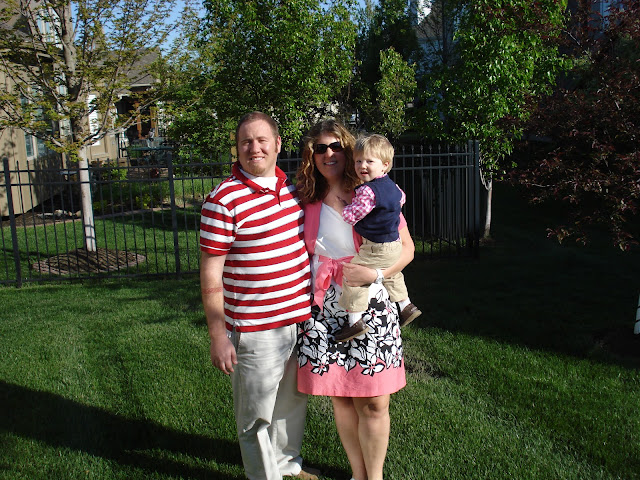 This month has been nothing short of amazing.  I feel like we're finally turning a corner in the whole tantrum department. {knock on wood}  Perhaps all those people who said maybe we were just getting the terrible twos over with early were actually right!  {God I hope so}  Between being able to be outside more and burn off some of that toddler energy and his language explosion meaning he can actually communicate it's like we got a whole new kid.  A happy, chatty kid who actually listens.  {most of the time}  And is actually enjoyable to be around.  {most of the time}  It's amazing.  I can't wait to see what's ahead because it's hopefully only going to get better from here! 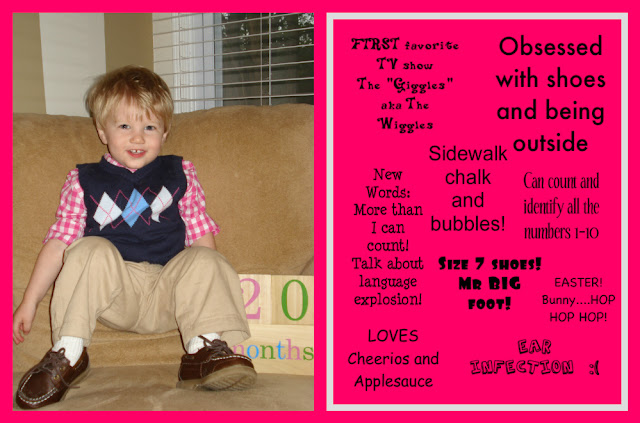 Happy 20 months to my little man!

Sometimes life just gets in the way

Pardon me while I clear the cobwebs around here.
We've been trying to live life a little more unplugged lately and truth be told,
I haven't missed my little piece of the Interwebs.
Jamie has been SOOO much more enjoyable in the evenings when I actually sit down and play with him instead of trying to cook dinner, attempt to clean, do laundry, check instagram/twitter/facebook, read a blog, watch TV all in the 2 hours we have together before little man goes to bed.
Amazing how much less whining we hear in the evenings now.
Poor guy just wanted a little mommy/daddy attention.

Besides who has time to blog when you have romantic dates to go on... 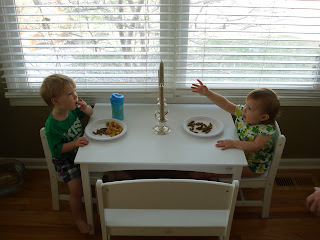 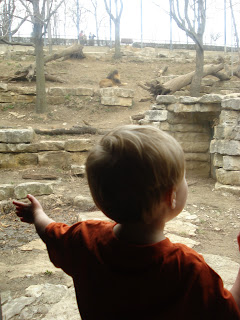 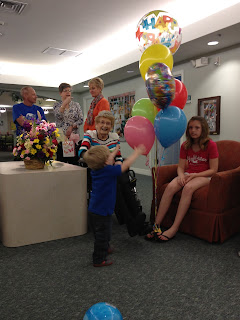 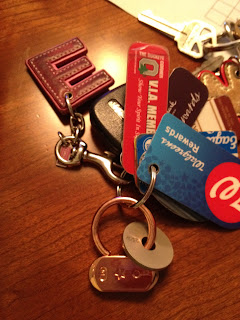 Hunger Games to watch and Marital batteries to recharge... 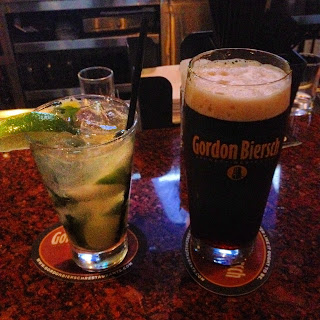 Decadent brownies to eat...
{Is it bad I celebrated 27 pounds lost with a brownie??} 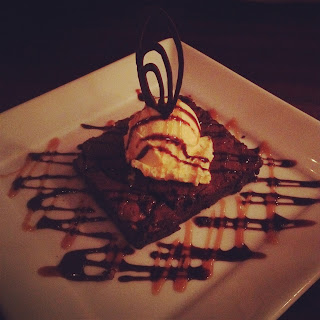 I'm learning to let go {of my iPhone} and it feels great!
But sometimes, it's still nice to come back home! 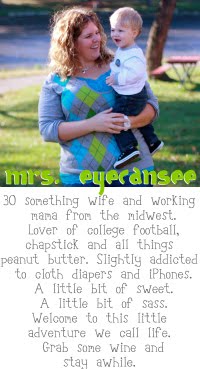 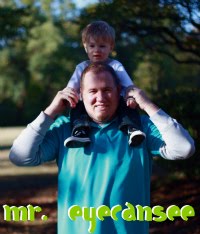 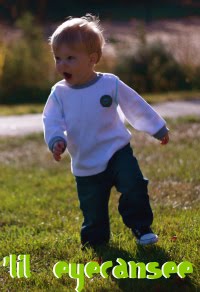